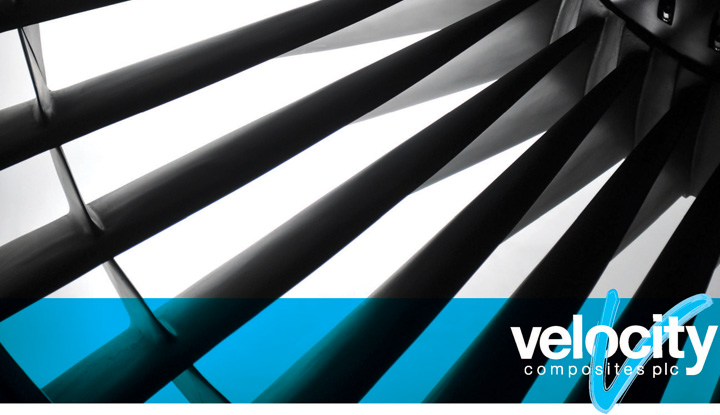 Velocity Composites plc, the provider of highly engineered kits for the aerospace industry, is today holding its first Annual General Meeting as a quoted company at which Mark Mills, Chairman, will make the following remarks:

"2017 was a transformational year for the Company, in which Velocity was admitted to AIM and the strength of the Velocity proposition, built up over the last 10 years, and the business model was further proven by strong levels of industry take up, including several new customers. These customers rightly seek to reduce costs and increase their own manufacturing capacity by outsourcing the non-core aspects of their operations and using Velocity’s model of highly engineered composite and consumable kits being delivered just in time, line side, in the form of use.

The amount of revenue contracted for the current financial year ended October 2018 is also significant (provided there are no fluctuations in demand signals from customers) and is currently circa £23.0m. In addition, the Company has agreed in principle a further £4.5m of revenue which is expected to be contracted imminently. In some cases, the Company has already started work on this business and projects. Together this equates to circa £27.5m of contracted or agreed in principle revenue which represents 79% of current market expectations for the full year.

Progress on new business continues to be made and encouragingly, the amount of work, to discharge over the remainder of FY18 through to FY20, without any new business wins, already exceeds £50m (and at suitable gross margins) and will increase further upon agreement to new contracts. In recent months there have been some demand reductions with some platforms (e.g. A330, A380 and A400M) decelerating faster than anticipated. The Board has also identified a potential contract which was initially determined to be profitable, on the basis of a stable rate of build. However, the customer recently advised a rate reduction and, as such, Velocity has declined the contract on the basis of significantly reduced profitability. These two developments have had an impact of approximately £2m on the visibility of this year’s revenue outturn, but management is confident that further work can be won to replace the above and bridge the gap in order to meet market expectations for the year ended October 2018, if market conditions and customer demand remain stable.

Work has been undertaken to rectify some of the contract structuring to prevent the Company from suffering from a gross margin perspective should demand volumes from customers be lower than forecast. Even though the first three months of the financial year are the quietest for the Company, gross margins have increased over the period and the Company aims to return to gross margins more reflective of historic levels.

Peter Turner has indicated to the Board that he would like to retire as he approaches his 70th birthday. Peter has agreed to stay on the Board until one or more suitable replacements as non-executives have been found and, in particular, a replacement as head of the audit committee. A search has already started for two new non-executives and a further announcement will be made when appropriate. Following consultation with key shareholders, the intention is to appoint one non-executive Director with an audit and finance background alongside another one with manufacturing and public company experience.

Since IPO, the Company has won significant new business and momentum remains firmly with the Company as they are approached by more and more potential customers looking for significant savings versus their existing processes. Velocity has started to benefit from economies of scale and this will drive further cost savings, both for the Company and its customers.

The Board remains excited about the prospects for the Company and this has been reinforced by recent additional industry accreditations that provide the Company with access to new platforms and programmes.

In addition to the above, we continue to expand the customer base, including for programmes to be delivered to customers in Europe and beyond. The scale of composite production in these locations dwarfs the UK market and progression of these opportunities remains the correct strategy. As indicated with the full year results, we continue to make significant progress with respect to opening a new facility and expect to complete this during the current calendar year.

The Board continues to look forward to the future with confidence as the Company reinforces its position with customers and suppliers, enabling rapid, profitable growth this year and beyond."