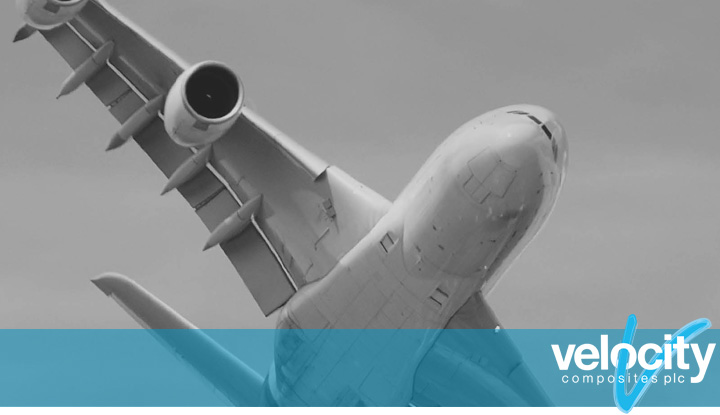 Velocity, the leading supplier of advanced composite material kits, providing engineering value-solutions for the global aerospace industry, announces an encouraging start to trading in the first 11 weeks of the new financial year (‘FY19’). In addition, the Company also announces that, further to the announcement on 5 September 2018, Alan Kershaw, Chief Financial Officer (“CFO”), will leave the Company on 31 January 2019 with Andrew Hebb replacing him as interim CFO (non-board) whilst the Company continues its search for a permanent CFO.

Trading for the first 11 weeks of FY19 has been in line with expectations in the historically quiet first quarter. The gross margin percentage is significantly ahead of the same period in the prior year and is broadly in line with the gross margin percentage achieved in the second half of FY18 (approximately 20%). Cash consumption for the quarter is expected to be modest and reflects seasonal variations in working capital.

As stated in the Company’s Annual Report published today, the Board expects FY19 to be a period of consolidation and re-building of customer confidence and our sales pipeline. As a result, the Board expects to deliver revenue and gross margin ratio at a similar level to that achieved in FY18.

“It’s a promising start to the new financial year and, given the internal distractions we have faced recently, underlines the confidence we have in the long-term future of Velocity and the growth opportunity available to us.”

The Company confirms that, further to the announcement on 5 September 2018, after a period of orderly handover it has now received and accepted the resignation of Alan Kershaw as its Chief Financial Officer and Company Secretary with effect from close of business on 31 January 2019.

Since the announcement in September, Alan has continued to positively contribute to the trading and governance of the Company during a difficult period. Alan has also undertaken a professional and orderly handover to interim CFO Andrew Hebb, who will provide the Company with its financial leadership until a new permanent CFO has been appointed. Since 2009 Andrew has been a professional interim CFO for several AIM listed and private companies across a range of sectors. Prior to that, as CFO, Andrew helped build Hedra Plc into a major public sector consulting business and managed the sale process in 2008. Previously Andrew held CFO and operational roles in major UK companies. Andrew Hebb will not be joining the Board of the Company but will support the Board as Company Secretary. The search for his permanent replacement is ongoing.

“Alan has continued to demonstrate integrity, professionalism, and leadership during an uncertain period for the Company. I would also like to place on record the thanks of the Board for his valuable contribution to transform the Company through the IPO process, and we wish him well in his future endeavours, where Alan will be sure to add a great deal of value.

I am pleased to welcome Andrew Hebb who has been working with Velocity since November 2018 as part of an orderly handover with Alan. Andrew has a wealth of experience having been interim CFO of a number of public companies and we are pleased to have him join the Company while we continue our search for a permanent replacement.”

Velocity announces an encouraging start to trading in the first 11 weeks of the new financial year.

Our contact for all media enquiries relating to Velocity Composites is Cat Valentine at Belvedere Communications Ltd.